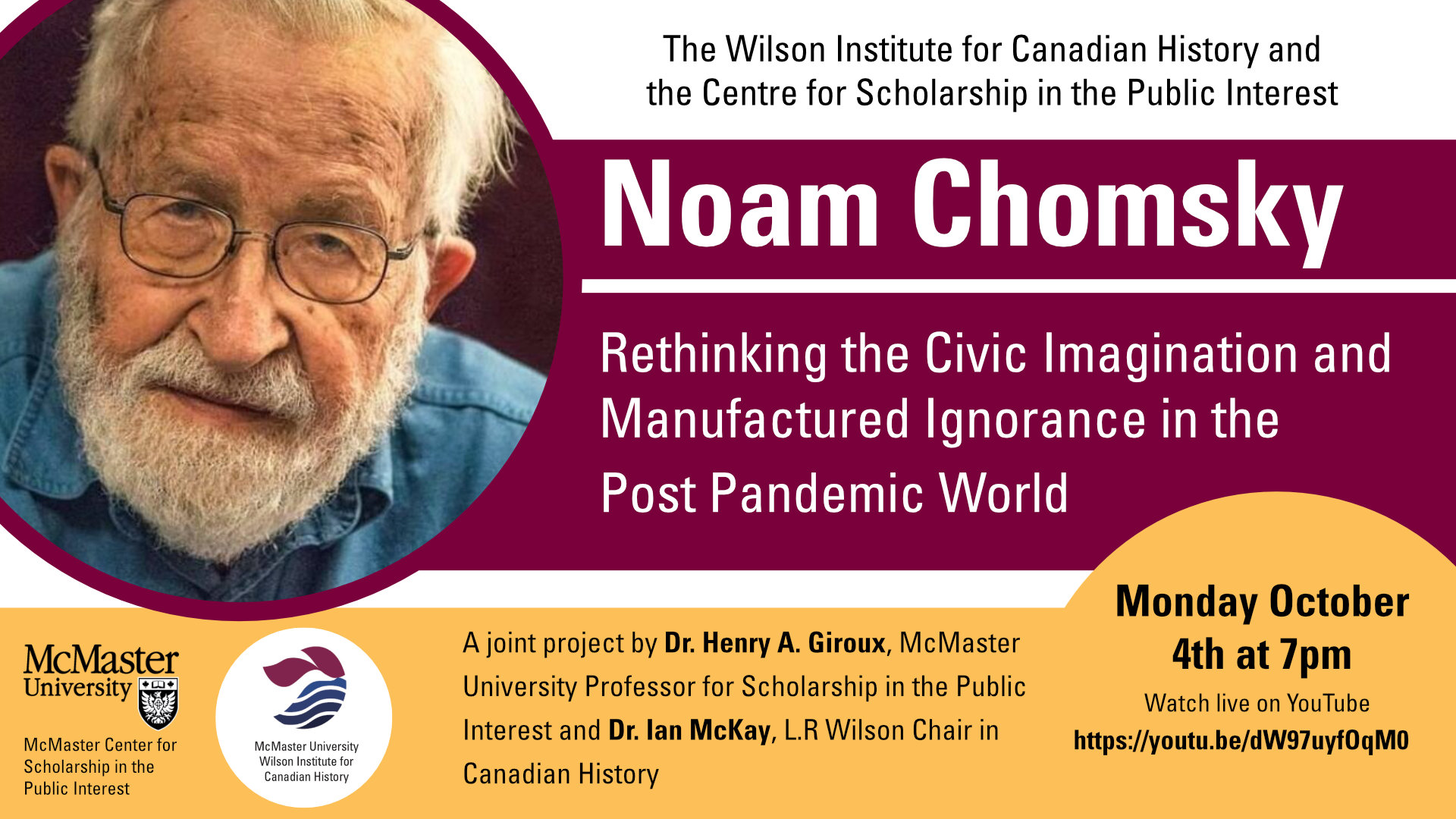 The Wilson Institute for Canadian History and the Center for Scholarship in the Public Interest is pleased to present Noam Chomsky “Rethinking the Civic Imagination and Manufactured Ignorance in the Post Pandemic World.” Monday, 4 October, at 7 p.m.

This is a joint project sponsored by Dr. Henry A. Giroux, McMaster University and Professor for Scholarship in the Public Interest and Dr. Ian McKay, L.R. Wilson Chair in Canadian History, Professor of History.

Avram Noam Chomsky[a] (born December 7, 1928) is an American linguist, philosopher, cognitive scientist, historian,[b][c] social critic, and political activist. Sometimes called “the father of modern linguistics”,[d] Chomsky is also a major figure in analytic philosophy and one of the founders of the field of cognitive science. He is Laureate Professor of Linguistics at the University of Arizona and Institute Professor Emeritus at the Massachusetts Institute of Technology (MIT), and is the author of more than 150 books on topics such as linguistics, war, politics, and mass media. Ideologically, he aligns with anarcho-syndicalism and libertarian socialism.

Born to Jewish immigrants in Philadelphia, Chomsky developed an early interest in anarchism from alternative bookstores in New York City. He studied at the University of Pennsylvania. During his postgraduate work in the Harvard Society of Fellows, Chomsky developed the theory of transformational grammar for which he earned his doctorate in 1955. That year he began teaching at MIT, and in 1957 emerged as a significant figure in linguistics with his landmark work Syntactic Structures, which played a major role in remodeling the study of language. From 1958 to 1959 Chomsky was a National Science Foundation fellow at the Institute for Advanced Study. He created or co-created the universal grammar theory, the generative grammar theory, the Chomsky hierarchy, and the minimalist program. Chomsky also played a pivotal role in the decline of linguistic behaviorism, and was particularly critical of the work of B. F. Skinner.

An outspoken opponent of U.S. involvement in the Vietnam War, which he saw as an act of American imperialism, in 1967 Chomsky rose to national attention for his anti-war essay “The Responsibility of Intellectuals”. Becoming associated with the New Left, he was arrested multiple times for his activism and placed on President Richard Nixon’s Enemies List. While expanding his work in linguistics over subsequent decades, he also became involved in the linguistics wars. In collaboration with Edward S. Herman, Chomsky later articulated the propaganda model of media criticism in Manufacturing Consent and worked to expose the Indonesian occupation of East Timor. His defense of unconditional freedom of speech, including that of Holocaust denial, generated significant controversy in the Faurisson affair of the 1980s. Since retiring from active teaching at MIT, he has continued his vocal political activism, including opposing the 2003 invasion of Iraq and supporting the Occupy movement. Chomsky began teaching at the University of Arizona in 2017.

One of the most cited scholars alive,[19] Chomsky has influenced a broad array of academic fields. He is widely recognized as having helped to spark the cognitive revolution in the human sciences, contributing to the development of a new cognitivistic framework for the study of language and the mind. In addition to his continued scholarship, he remains a leading critic of U.S. foreign policy, neoliberalism and contemporary state capitalism, and mainstream news media. Chomsky and his ideas are highly influential in the anti-capitalist and anti-imperialist movements.