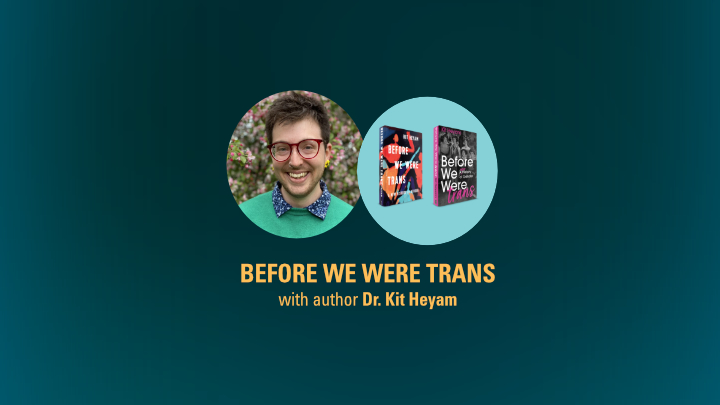 Before We Were Trans with Dr. Kit Heyam

By English & Cultural Studies, Gender & Social Justice, and the School of the Arts

Today’s narratives about trans people tend to feature individuals with stable gender identities that fit neatly into the categories of male or female. Those stories, while important, fail to account for the complex realities of many trans people’s lives.

“A groundbreaking global history of gender nonconformity,” Dr. Heyam’s book Before We Were Trans (2022, Seal Press) illuminates stories of people across the globe, from antiquity to the present,?whose experiences?of gender have?defied?binary categories. Blending?historical analysis?with sharp cultural criticism, Before We Were Trans offers a new, radically inclusive?trans history, chronicling expressions of trans experience that are often overlooked, like gender-nonconforming fashion and wartime stage performance. Before We Were Trans?transports us?from Renaissance Venice to?seventeenth-century?Angola, from Edo Japan to?early America, and looks?to the past to uncover new horizons for?possible trans futures.

Please join us on Zoom to hear Dr Heyam read from their book, talk with us about the messiness of trans history and of gender, and discuss their recent blog post for Shakespeare’s Globe focused on I, Joan – Charlie Josephine’s play featuring Joan of Arc as a non-binary character.

Dr. Kit Heyam is a university lecturer, a queer history activist, and a trans awareness trainer who has worked with organisations across the UK. They have been committed to queer history since their teens, when they found the sense of community they were lacking by identifying with queer figures from the past, and their first book, The Reputation of Edward II, 1305-1697: A Literary Transformation of History, was the first account of how fourteenth-century English king Edward II acquired his queer reputation. They live in Leeds, UK, with their partner Alex.